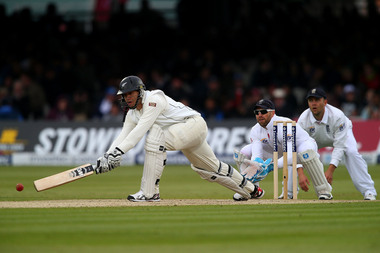 Ross Taylor mightn't adjust the field and deliver the team talks any more in the New Zealand team, but he led by example…

Thieves ripped a safe from the wall of a hotel room near the Cannes Film Festival and made off with around US$1 million worth of jewellery, in a brazen late-night burglary just hours after the screening of a film about break-ins at the homes of Hollywood celebrities, French officials said Friday.

The apparently well-planned robbery at the Novotel hotel took place in the room of an employee of Chopard, the Swiss-based watch and jewelry maker and festival sponsor that was hosting a splashy gala event in a far ritzier hotel around the same time, officials said.

Chopard has loaned jewellery to A-list stars who walk on the festival’s famed red carpet under rapid-fire flashes of photographers’ cameras. Already this year model Cara Delevingne and actress Julianne Moore have walked the carpet in Chopard gems.

“The jewels stolen are not part of the collection of jewels that are worn by actresses during the Cannes film festival,” Chopard spokeswoman Raffaella Rossiello told reporters in a brief statement.

Bernard Mascarelli, a judicial police spokesman in the nearby city of Nice, said he didn’t know the exact type of jewellery taken, or its exact value. “Numbers have been put forward that we’re still trying to verify, but the figure of $1 million…

we’re in that range,” he said. Jean-Michel Caillau, a state prosecutor in nearby Grasse who is leading the investigation, said early estimates were that the loot could have been worth as much as US$1.4 million.

Rossiello countered that, saying: “The value of the pieces stolen is far lower than those in the figures circulating in the media.”

She did not say why the jewellery was brought to the Novotel during the film festival, or take reporters’ questions.

The theft was believed to have taken place sometime between 7pm Thursday and 3am Friday (local time), said Mascarelli, when the Chopard employee returned to the hotel room and noticed the damage. Mascarelli said he did not know whether the employee had been attending a Chopard gala that was running late into the night at the 5-star Hotel Martinez across town, where the company has a suite during the festival.

News of the robbery sent journalists scurrying to the Novotel, a business hotel about a 15-minute walk from Cannes’ seafront promenade. Dozens of police were involved in the investigation, and police vehicles could be seen outside the hotel Friday afternoon. Authorities were going over hotel surveillance cameras and questioning potential witnesses who might have seen any culprits.

“It seems pretty unlikely to us that it was just one person,” Mascarelli said. “Apparently this (hotel guest) was someone who was targeted because it wasn’t someone who had been seeking attention. … There must have been either inside complicity, or people who were in contact with this person and knew that the person had jewels,” he said.

Melissa Levine, a spokeswoman for Accor, the French hospitality giant behind Novotel, declined comment about the case.

On Thursday night, Chopard hosted a star-studded gala, and the festival screened Sofia Coppola’s The Bling Ring – a deadpan drama about celebrity-obsessed teenagers in Los Angeles who break into the homes of Paris Hilton and other stars. It’s based on a true story about high-school students who, after seeing online when certain stars are expected at a premiere or other event, take the opportunity to steal items from their homes.

Chopard manufactures the crystal and gold Palme d’Or trophy awarded each year to the festival’s top film. Festival organizers would not disclose the Palme’s whereabouts Friday, but said it was kept in a safe place. They had no comment on the robbery.