The power of punk on fashion 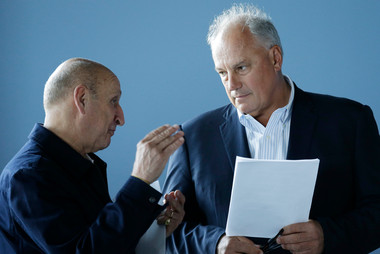 When punk emerged from the music scenes of New York and London its influence was felt in many walks of life, but few more so than fashion. The latest exhibition at New York’s Metropolitan Museum looks at how the movement took designers in new directions

In February, the creative director of Givenchy, Riccardo Tisci, attended the early morning press launch of Punk: Chaos to Couture, the sure-to-be-blockbuster show that opened last week at the Metropolitan Museum of Art in New York. A heavily studded jacket and trousers from his autumn/winter 2007 ready-to-wear collection were featured on a mannequin alongside Zandra Rhodes’s 1977 safety-pin dress, Moschino’s 1994 ball gown made from a bin bag, a ripped and shredded Chanel suit designed by Karl Lagerfeld in 2011 and, of course, the barely there safety-pin dress by Gianni Versace made famous by Liz Hurley in 1994.

“For me to be next to one of the most iconic dresses, the one with the safety pins of Elizabeth Hurley, I was like, wow, that’s a big moment,” saysTisci. “I sent a picture to my mum.”

For the past eight months, Tisci has been assisting Andrew Bolton, the curator of the Costume Institute at the museum, with his research for the just-opened exhibition. Bolton has made a selection of around 100 pieces of clothing, which when we met in March was still being finalised.

“We have a tale of two cities between New York and London, which looks at the cross-pollination of ideas between the two cities, and how Malcolm and Vivienne codified it to create what became know as a classic sort of punk look,” says Bolton.

“Punk was already happening in New York musically. You had Richard Hell, who was wearing T-shirts with rips in them and safety pins.

Malcolm met Richard through the punk scene in New York and he brought that scene back to London.”

The exhibition begins its journey with the New York nightclub CBGB, where Hell performed with his band, Television, in 1974. This is followed by a gallery inspired by McLaren and Westwood’s Seditionaries boutique on London’s King’s Rd, and others with themes including DIY Hardware (the use of studs, razor blades and safety pins), Bricolage (customisation and the use of recycled materials and rubbish), Graffiti & Agitprop (exploring punk’s tradition of provocation and confrontation), and Destroy (where clothes are ripped and shredded).

“I’ve really focused on designers who have continued to engage with that aesthetic since the 1970s, or designers who have stand-alone collections – like Zandra Rhodes’s Conceptual Chic, which was like a landmark in the history of fashion and punk,” says Bolton. “It was 1977, the heart of punk, and it was actually punk in a way. As soon as it became defined, it sort of lost its edge a little bit.”

He takes his cue from a quote by Mick Jones of The Clash, which says that punk in its purest form lasted for only 100 days at The Roxy club in London before the media got behind it and created something different from what it was originally.

” changed everything, it broke all the rules,” says Bolton. “It merged creativity with a really strong political voice.”

I met Bolton with Riccardo Tisci after the designer’s autumn/winter 2013 show in Paris, at Givenchy’s haute couture headquarters on Avenue George V. It was less than 48 hours after the show. Tisci hadn’t slept for two days because there were “technical hitches”, and confessed to feeling slightly jet-lagged. He took a seat, lit the first of a long chain of American Spirit Light cigarettes, and took a sip from a large mug of strong coffee. He was wearing jeans and a T-shirt with Nike trainers.

“Doing this collaboration with Andrew completely opened my mind to many things,” he said.

As well as looking at a lot of Westwood and McLaren, along with those who Bolton describes as the designers who engage with punk on a more conceptual level – such as Japanese designer Rei Kawakubo of Comme des Garcons, Tisci has revisited his own archive and discovered a substantial body of work from his eight years at Givenchy. His latest collection was a collage of pieces from that archive, mixing biker jackets with sheer lace skirts reaching to the floor, heavy zips and sweatshirts with images of Bambi. But there was a certain DIY, mismatched, devil-may-care attitude about the collection that owes something to the spirit of punk.

Though many designers could be culpable of simply making pastiche punk – a few studs and strategically placed zips do not a punk make – Tisci certainly has a raw energy and an irreverent restlessness that makes you feel he’s very capable of subverting the establishment. Most notably, he used his transgender friend, Brazilian model Lea T, to model in his autumn/winter 2010 advertising campaign – a bold move for a haute-bourgeois French fashion house.

“I did it with everyone on my back, thinking I was making the biggest mistake of my life, but I believed in it. And then it became such an amazing thing because a lot of people started to support me, like Oprah Winfrey, who invited Lea T to her show,” he says. “Sometimes to be rebellious in that way can bring positive feelings. I’m not scared to be judged.”

“Things have got quite safe,” says Bolton.

He was 9 in 1975, a preppy schoolboy growing up in Lancashire, with a big sister who was dressing like Patti Smith. “I was a bit too young to experience but I remember reading about it in Sounds and NME. I remember watching TV and seeing these punks walking down the King’s Rd. You had these old ladies with their shopping bags and little head scarves, and they couldn’t believe what they’d seen because nothing had happened like this before, or since, really. You still look at the T-shirts Malcolm did and they’re so shocking – the upside-down crucifix with the swastika, and the little boy from the paedophile magazine – and they’re so big and powerful; really harrowing images.”

Tisci, 38, was still a baby when the Sex Pistols played at St Martin’s School of Art in London on November 6, 1975. “When punk came out it was a big thing,” he says. “Punk had such an influence for everything and everyone… It’s a subject that still inspires people today.”

The current economic, political and social situation in Italy is not so far removed from the recession-racked Britain in the 1970s that led to punks picking up rubbish from the piles of uncollected refuse and wearing bin bags. “I am so proud to be Italian, but it is the most f*****-up country in the world. It is so destroyed as a country, politically, religiously… I mean everything is gone.”

I wonder if the economic crisis might be a breeding ground for a new movement of extreme creativity, but Tisci isn’t so sure. “People should be exploding, blown away by creativity… It seems like people, I hope it’s wrong, but it seems like the young generation are so scared, I don’t understand why. I think today, for me, punk is an attitude, and today people are so scared to be punk because there is so much money involved in society, there is so much selfishness. In the last two decades it is all about business.”

Instead, punk continues to be referenced and commodified.

A collection of punk-inspired pieces by designers including Vivienne Westwood, Rodarte, Dolce & Gabbana and Givenchy went on sale at Moda Operandi to coincide with the exhibition, and some of the early, most guttural pieces from Malcolm McLaren and Vivienne Westwood were auctioned by the New York vintage clothing dealers Resurrection, with prices estimated at US$2200 (NZ$2600) for a Seditionaries Destroy T-shirt, and $6000 for a Westwood McLaren parachute jacket.

There are punk references everywhere for both men and women, from New York menswear designer Thom Browne’s studded tailoring, to London-based nouveau punk Louise Gray’s collection for autumn/winter, which was accessorised with toilet rolls for jewellery and BacoFoil basting tins as belts.

And is the use of punk as a trend simply superficial?

“For me the ones that are most punk are the ones that don’t use the classic punk icon images, but really they are punk inside,” says Tisci. “Like Rei Kawakubo or Miuccia Prada. She is very bourgeois, but she is punk in her own way. Punk is really about the attitude for me.”

Bolton draws a link between haute couture and punk. “I wanted Givenchy to represent the punk couture section. We did a show in 2005 called Anglomania that touched on punk as an attitude. This show is more about punk as an aesthetic… I’ve always felt there is such a strong similarity between haute couture and punk; punk was about creating one-off pieces. You might buy a jacket from a store and customise it; you’re the only one in the world with that jacket. I love the idea of DIY, the idea of handcraftsmanship. So with Riccardo’s work, I looked at pieces that, instead of using traditional haute couture embroidery or feathers or lacework or leather, are using punk materials and hardware.”

Bolton says that what Versace did for the safety pin, Tisci has done for the stud, which he made”grandiose and gargantuan”. Bolton has also picked two haute couture dresses made from chiffon with zips. He likes the idea of “fluidity and subtleness of the couture but with punk hardware”.

Ultimately, however, for Tisci punk is not simply studs, zips and rips. Punk is about an attitude, a certain rebelliousness. It’s something he shares with some of his rebel heroes, who include Gianni Versace, Azzedine Alaia, Comme des Garcons, Yohji Yamamoto and Helmut Lang, all of whom are represented in the exhibition.

“These people were very punk because they didn’t care what people were thinking about them,” he says. “They were just going for it to create something new, and that is very important for me.”

? Punk: Chaos to Couture runs at the Costume Institute at the Metropolitan Museum, New York, until August 14 (metmuseum.org).